What not to miss!

The fossils at the museum preserve both the details of the track and the actions of the track-maker. As a visitor, that means you’ll get to see details of dinosaur feet and also learn about dinosaur behavior. But that’s not all, based on the many other fossils found at the site, you’ll also begin to understand what this area looked like 200 million years ago. 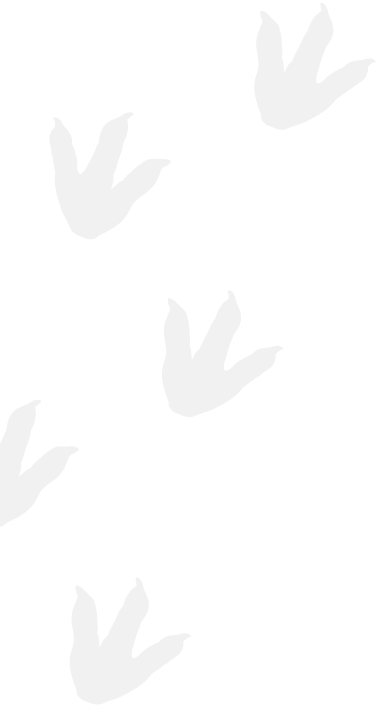 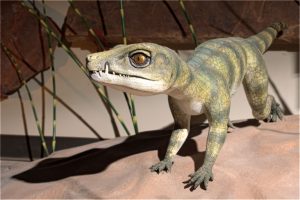 Don’t miss the 5 life-sized models found throughout the museum. Beginning in 2010, the museum commissioned local artist, Erric Wan-kier, with Art Escapes 3D, to construct the models. Moreover, he worked with our paleontologists to make them as accurate as possible. Currently, we have a juvenile Dilophosaurus, a Megapnosaurus, a Dimorphodon, a Scutellosaurus, and a Protosuchus. 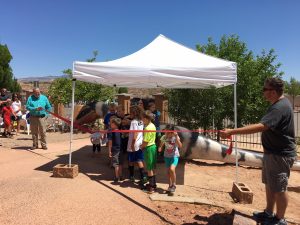 Come play in the Dino Park! Where you’ll find a sandbox and a climb-on dinosaur, along with picnic tables and a “Walk Through Time” exhibit. The museum plans on adding 2D sculptures to the exhibit showing various kinds of ancient animals. See what’s new today. 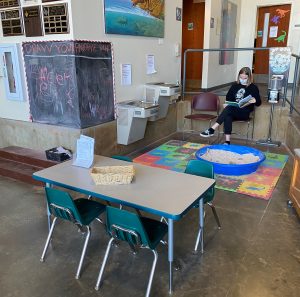 We have a new activity area in the lobby of the museum. We will have rotating activities such as finding fossils, dinosaur-themed games, coloring pages, and more. Remember to ask about our scavenger hunt! 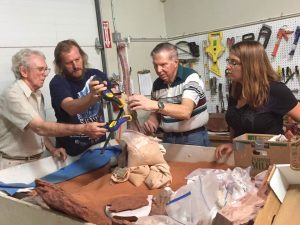 Check out the fossil prep lab to see volunteers and paleontologists at work. Our volunteers handle and clean fossils from all over Utah. Click Here for Information About Volunteering

Fossil Not to Miss at the Museum

These tracks are called Characichnos and were made by meat-eating dinosaurs (like Megapnosaurus) while swimming in deep water. As they paddled with their back legs, their toes would strike the muddy bottom and make long scratch marks. The dinosaur swim tracks discovered at this site are the largest and best-preserved collections of swim tracks ever found. Photo by: Bill Biesele 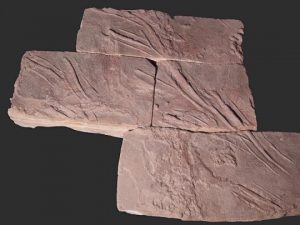 The crouching trace is the rarest track in the museum, with less than a dozen known world-wide. It was made when a juvenile meat-eating dinosaur crouched into the sand to rest. The fossil preserves this unique behavior as well as impressions of the dinosaur’s hands.

There are several examples of skin impressions at the museum. See what the bottom of dinosaur feet looked like! 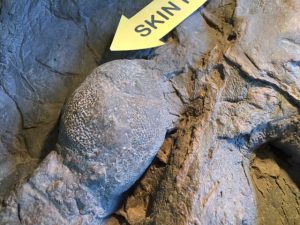 Eubrontes tracks are the largest at the site. Notice the claws and toe pads? They were most likely made by a Dilophosaurus-like meat-eating dinosaur. 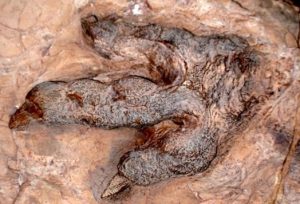 Grallator tracks are from a smaller meat-eating dinosaur, similar to a Megapnosaurus. These are the most numerous tracks at the museum. 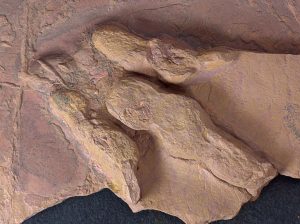